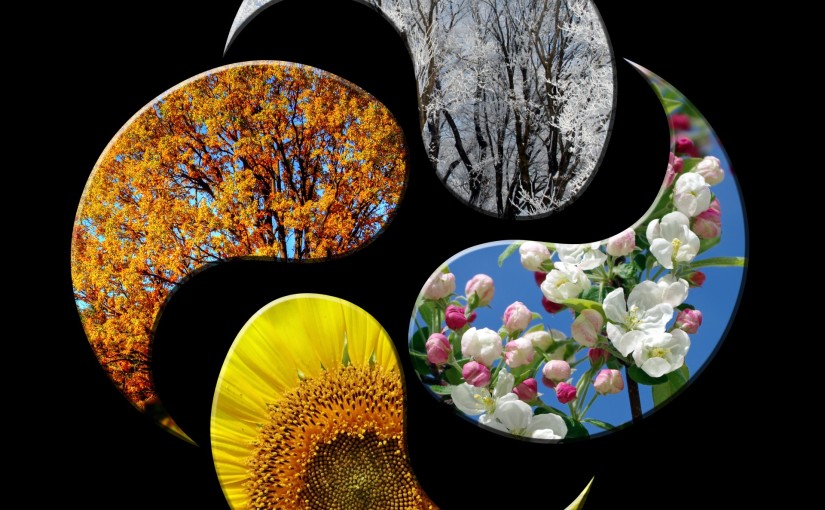 This article gives a brief visual introduction to the four celestial events that are determining the four seasons of a year. Those are the equinoxes and solstices, which are also the foundation of the tropical zodiac and western astrology.

The two equinoxes and the two solstices are the turning points of the seasons which are the result of the Sun’s path along the ecliptic. Those four turning points are the foundation of the tropical zodiac (from Greek tropoi = turning points) and correlate with the beginning of the signs Aries, Cancer, Libra and Capricorn.

Before we go into each one of the “Big 4”, I’d like to show you two pictures including all four turning points. The first is made, like all other pictures in this article, using the Cosmic Watch App, displaying the turning points of the seasons in a two-dimensional image of the celestial sphere. The second picture is the same thing, but like it is presented in a horoscope graph. This horoscope is made using Planetdance program. Both figures are showing the position of the Sun, the Moon and the planets on March 24th, 2019. 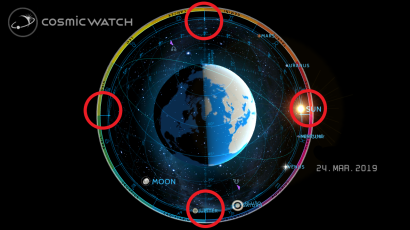 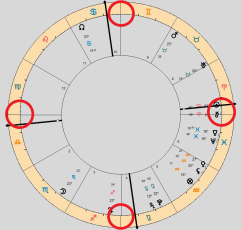 Note: The Sun, Moon and planets are moving in a counterclockwise direction along the ecliptic / through the zodiac.

The Spring Equinox – Beginning of the Year

The beginning of spring in the northern hemisphere is marked by the Sun crossing the celestial equator from south to north. This is also the ingress of the Sun into the sign of Aries, which is the first sign of the tropical zodiac. This point marks the beginning of a new astronomical and astrological year. The spring equinox is also called Aries Point = 0º Aries.

At the equinoxes, day and night are almost equal everywhere on Earth. This is also where the name equinox is derived from: from Latin ‘aequus’ (equal) and ‘nox’ (night).

Below three pictures demonstrating the Sun’s placement on the celestial sphere from different perspectives during the spring equinox. A red arrow is showing the movement of the Sun along the ecliptic (a.k.a. the zodiac) from south to north, i.e. from below the celestial equator towards above it. This year’s spring equinox took place on March 20, 2019, at 11:59 pm GMT +2.

The Summer Solstice – High Above

After the spring equinox, the next turning point from one season to another is when the Sun reaches the highest point (the farthest point north) on the ecliptic, which marks the beginning of summer in the northern hemisphere. That point is at the same time the ingress of the Sun into the sign of Cancer in the tropical zodiac. Below two pictures showing the Sun’s placement at the summer solstice. The Sun is marked by a red circle. This year’s summer solstice takes place on June 21st, 2019, at 6:55 pm GMT +2.

The Autumn Equinox – Setting Below

The next turning point and the changing of the season from summer to autumn in the northern hemisphere takes place when the Sun again reaches the celestial equator, but this time she is not rising above it but setting below it. At the same time, the Sun enters the sign of Libra in the tropical zodiac. Like at the spring equinox, day and night are again almost equal. The autumn equinox this year takes place on September 23rd, 2019, at 10:51 am GMT +2. Below three pictures showing the placement of the Sun during the autumn equinox. A red arrow is showing the Sun’s movement from above the celestial equator towards below it.

The final turning point marks the beginning of winter in the northern hemisphere and occurs when the Sun reaches the lowest point on her path along the zodiac. At that point, the Sun is farthest south from the celestial equator. This is also the ingress of the Sun into the sign of Capricorn in the tropical zodiac.

Below two pictures showing the Sun’s placement at the winter solstice. This year’s winter solstice will take place on December 22nd, 2019, at 6:20 am GMT +2. At the same time, Jupiter will be at the beginning of Capricorn, meaning this year’s winter solstice will come with a Sun/Jupiter conjunction. In the first picture below, you can see a third planet in the circle next to the Sun and Jupiter. This planet is Saturn which has been in the sign of Capricorn since December 20, 2017. Saturn will leave Capricorn on March 22nd, 2020. You can spot Saturn easily in the second picture, where he is on the right side next to the red circle with the Sun and Jupiter.

Finally – Equinoxes and Solstices at a Glance

Below, for the sake of easy comparison, all four big celestial events of a year, the spring equinox, the summer solstice, the autumn equinox and the winter solstice, at a glance.

Dates for equinoxes and solstices taken from Ingresses and Returns at astro-seek.com.

Pictures used in this article are made using Cosmic Watch App.